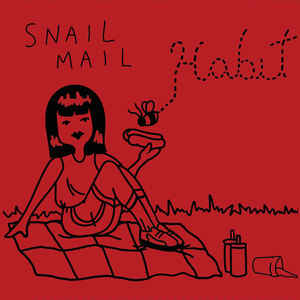 Coulda sworn you heard this one on the radio, right? Deja vu, a dream, or another life? Well, by this point you probably have. Snail Mail, the musical moniker for Ellicott City’s Lindsey Jordan, has blown up since the quaint days of writing songs on guitar in her bedroom after school or over summer vacation. Jordan released her self-recorded solo EP Stick in 2015. With numerous shows and at least one tour under her belt, Jordan teamed up with Ryan Vieira (bass) and Shawn Durham (drums) to record her Sister Polygon debut, Habit, with the label’s very own G.L. Jaguar and frequent label-collaborator Jason Barnett (Coup Sauvage and the Snips, Sneaks, Gauche). After the release of Habit, Snail Mail’s acclaim, and touring demands, grew faster than a marshmallow in a microwave. To meet those demands, she enlisted Alex Bass and Ray Brown to join her on the road. And the successes make sense. Jordan's dark and wandering melodies and intricate guitar playing warrant attention, and lots of it, they reward being returned to over and over again. Jordan has continued to soar with Brown and Bass by her side. She released her debut LP, Lush, on Matador in 2018, and has toured a truly mind-boggling amount over the past 2 years spanning North America, Europe, and Asia.