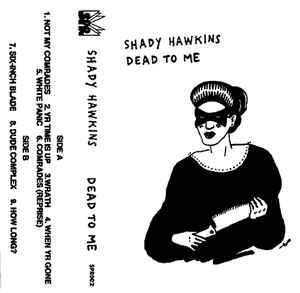 The now-defunct militant feminist revengecore band burned fast and bright in hetero-hegemonic NYC punk scene of 2010-2015. A self-described band of witches and witch-sympathizers, Suzy X, Matt Presto, Sabrina Elba, and Mike Funk pushed a emphatically queer and brown viewpoint to the front, and demanded to be seen and heard. The heart and minds of Sister Polygon Records took notice and released the band’s debut album, Dead To Me. The band describes themselves as “hell-bent on hexing away all hegemonies”, and we couldn’t agree more. Their music sounds like freaky, goth ode to the music of La Lupe, Babes In Toyland, The Wipers, Lydia Lunch, and Shannon & The Clams, but without a whiff of the feeble nostalgia that usually trails behind such pursuits. The music of Shady Hawkins sounds just as threatening and alive today as it did in 2012. A tribute to merit of remembering to look good and have fun while asserting oneself forcefully and unrepentantly.